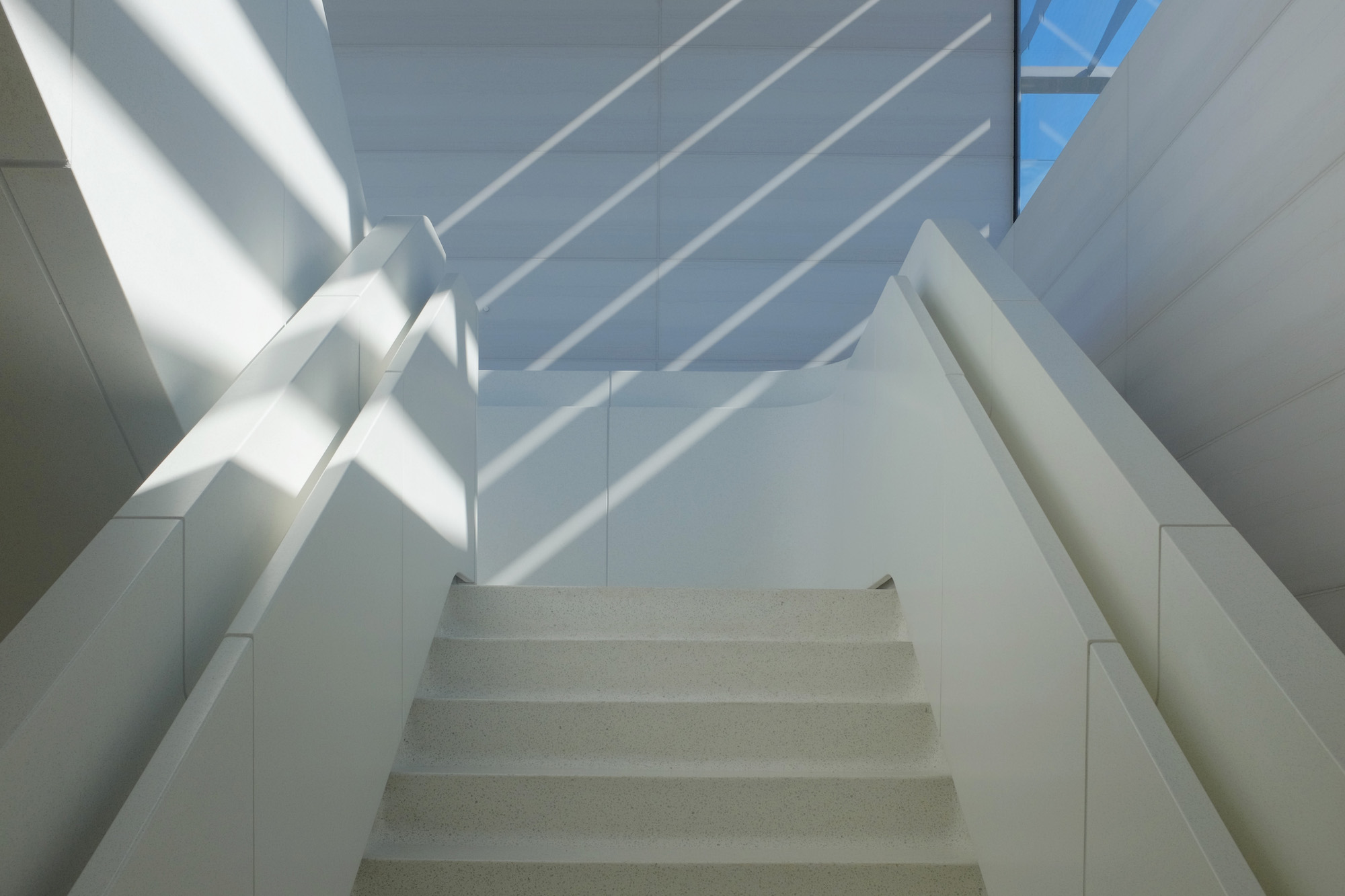 I read an article on HN about FAANG companies. As some of the top places to work, I wondered if my qualifications matched up with roles there. Since I've been a Mac user since 1992 and an Apple ][ user since I was a baby, I figured I'd grab a bunch of roles from Apple's career site and figure out which ones would be the best match for my skillset.

Since the focus of this article is on lexical analysis, I'll just quickly go through how I got the role qualifications. 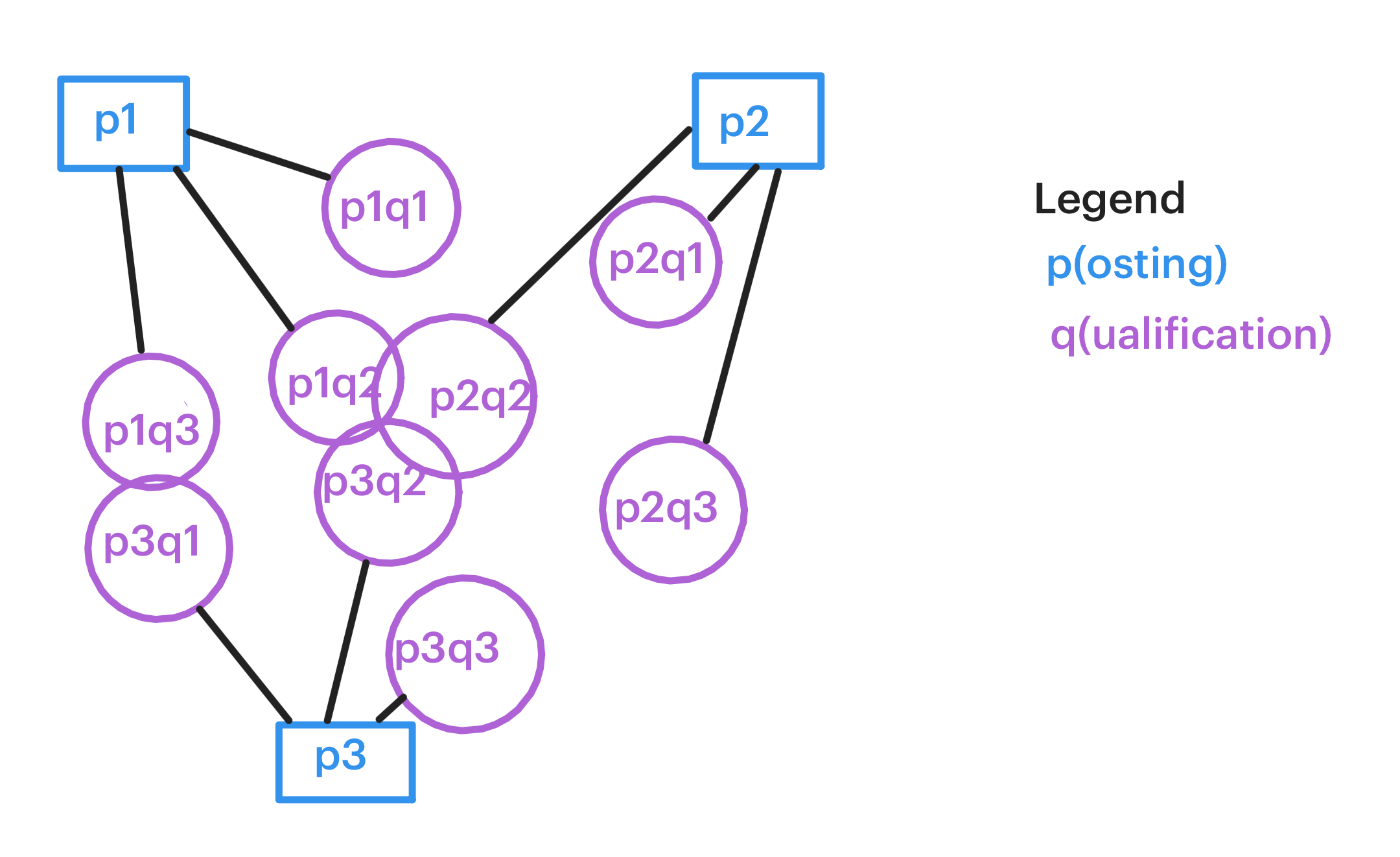 Now I am a total newbie to lexical analysis and had no clue how to compare two sentences. I ran across a couple of algorithms for this: Levenshtein Distance and Jaccard Index. They're both used to measure similarity of two strings or sets but completely differ in their respective algorithms. I wasn't sure which one to go with so I implemented both (using Distance library) out of curiousity. (l = Levenshtein, j = Jaccard.) (Thanks to this tutorial.)

For both Levenshtein and Jaccard, numbers closer to 0 mean the two sentences are more closely related. I also filtered out the most common words (stopwords) to increase the percentage of keywords in each comparison.

The idea was to produce a result like this:

Finally, I iterated through each qualification in each role and compared them with all qualifications in every other role:

Sentence 1: A keen ability to filter and distill substantial information for the right audience.
Sentence 2: Ability to participate in and facilitate requirements brainstorming sessions.
Levenshtein: 53, Jaccard: 0.208

Okay, I guess this is getting closer.

Here we go! Two qualifications from different job postings that are not exactly the same, but incredibly similar.

Rather than looking through the entire 2500-line output, I set the comparisons to only print if the Levenshtein score was below 30 and Jaccard was below 0.15.

So it appears that anything with a Levenshtein distance < 20 or a Jaccard distance < 0.1 is similar enough to be the same qualification. With that in mind, let's graph it.

I figured this would be pretty simple to plug into library that can spit out a nice-looking network graph. However, it's not quite so simple.

To create the graph, I used NetworkX, a Python module specifically for creating graphs. But NetworkX doesn't draw the graph, it only creates connections between nodes and edges and provides coordinates for everything. To draw it, I needed to use another library. I started off following the NetworkX docs and using Matplotlib, was simple and allowed me to generate simple graphs quickly.

A simple graph with two nodes (A, B) connected by an edge (A-B) can be created like this:

Now, if qualifications from different roles were exactly the same or similar (had a Jaccard distance < 0.1), I'd want to link them together:

To do the actual comparison:

Now, you may be wondering why I'm adding nodes as I did the comparison instead of generating all nodes (roles, qualifications) and edges (role𝑥←→qualification𝑦) first, then comparing and linking the similar qualification nodes. The issue was that if two or more qualifications from different nodes were exactly the same, and there were similar qualifications found, I'd only be able to add edges to the first one in the node list unless I also added unique IDs to the nodes. I implemented this the way I did out of laziness since I wanted to see results quickly: 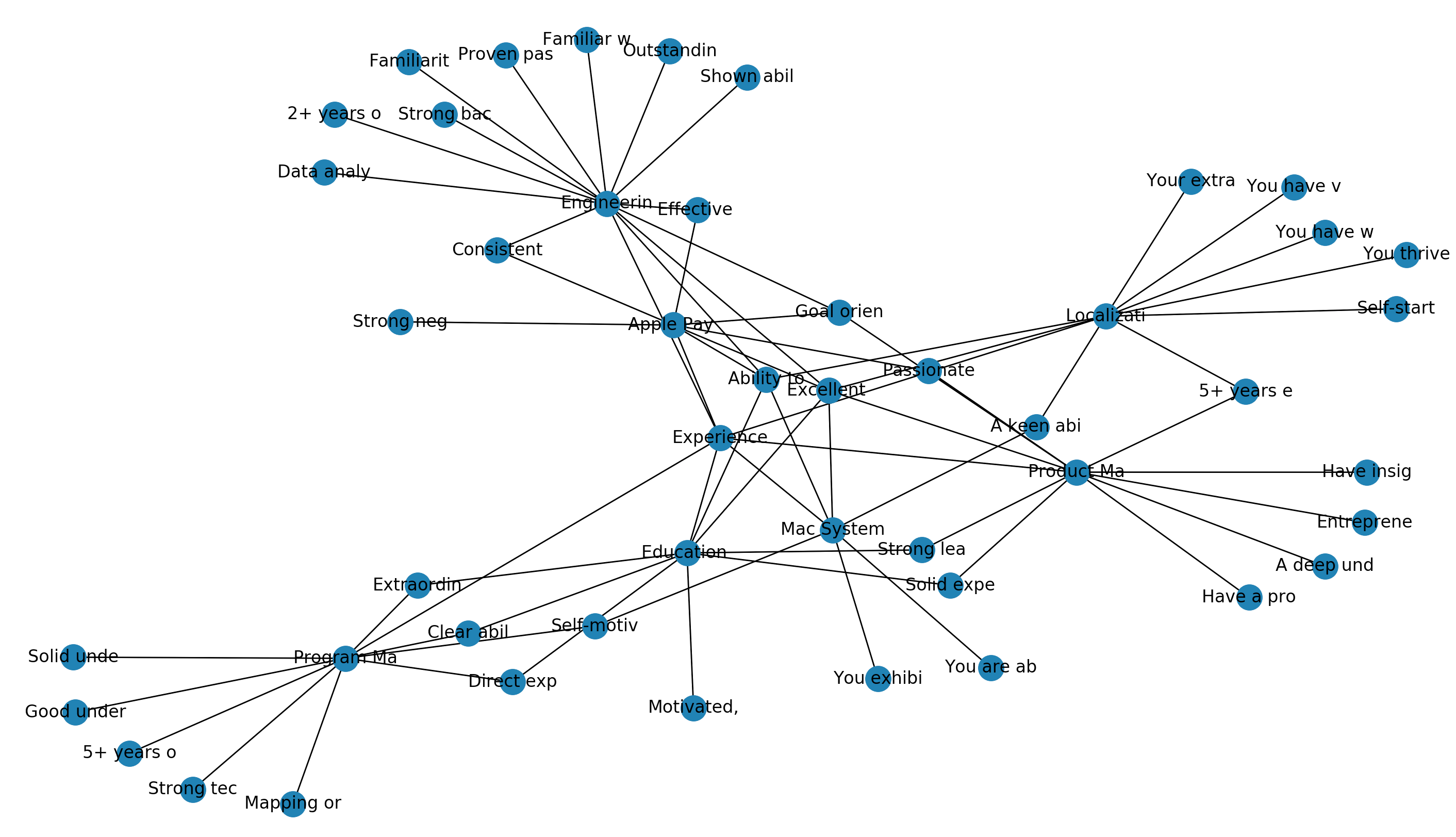 So, it's clear that some of the qualifications are similar between roles. But the graph was pretty ugly (especially since I had to truncate the qualifications to make them fit). I tried a bit more with Matplotlib but eventually implemented Plot.ly:

As expected, similar qualifications are linked together and it's easy to see the overlap between roles. Here's a sample of a triangle of roles with overlapping qualifications. Mousing over each node reveals the full qualification: 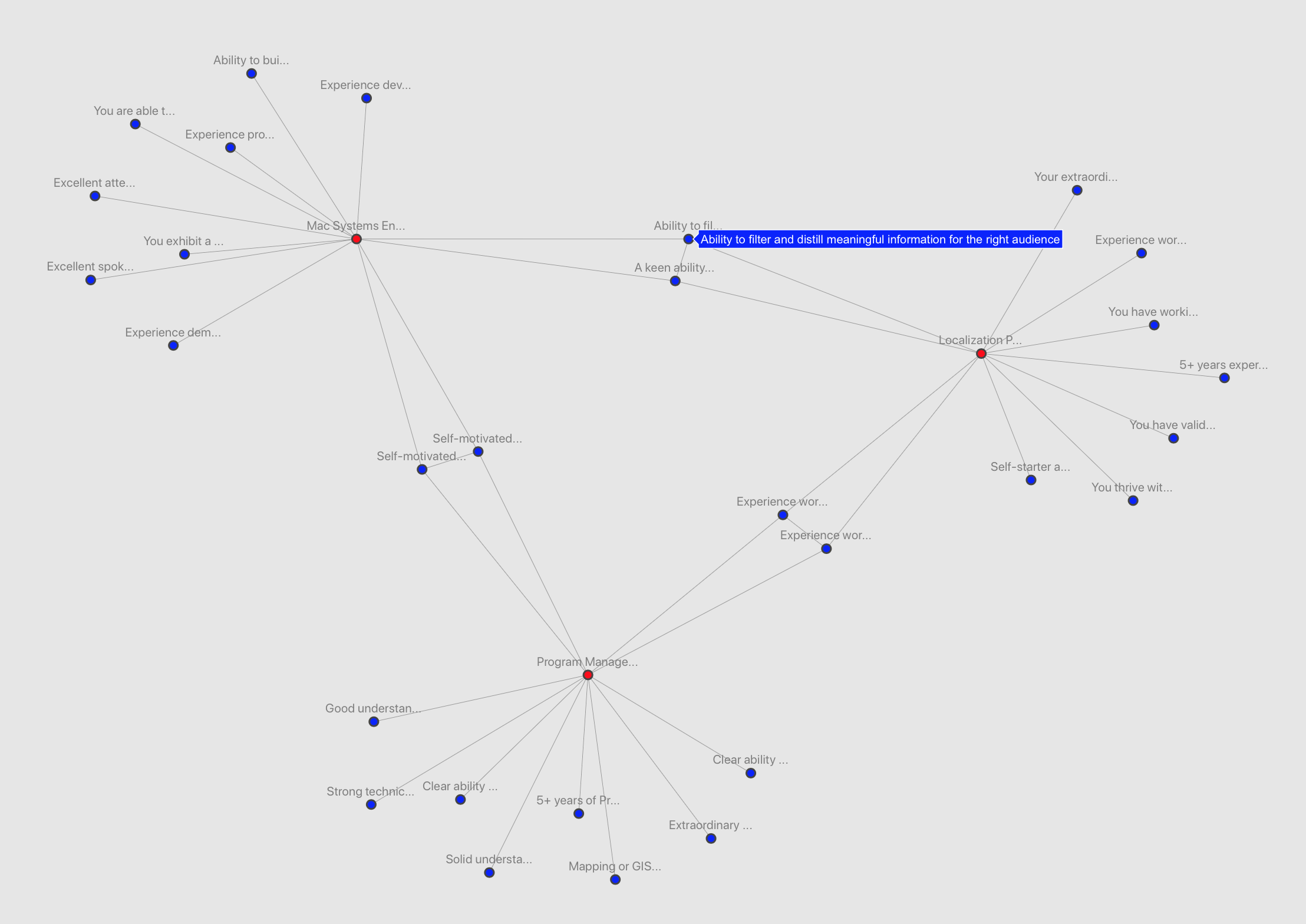 Some roles have even more overlap of qualifications. This is a bit more difficult to read since I haven't figured out a way to group the nodes, or to prevent lines from crossing each other (using this type of graph): 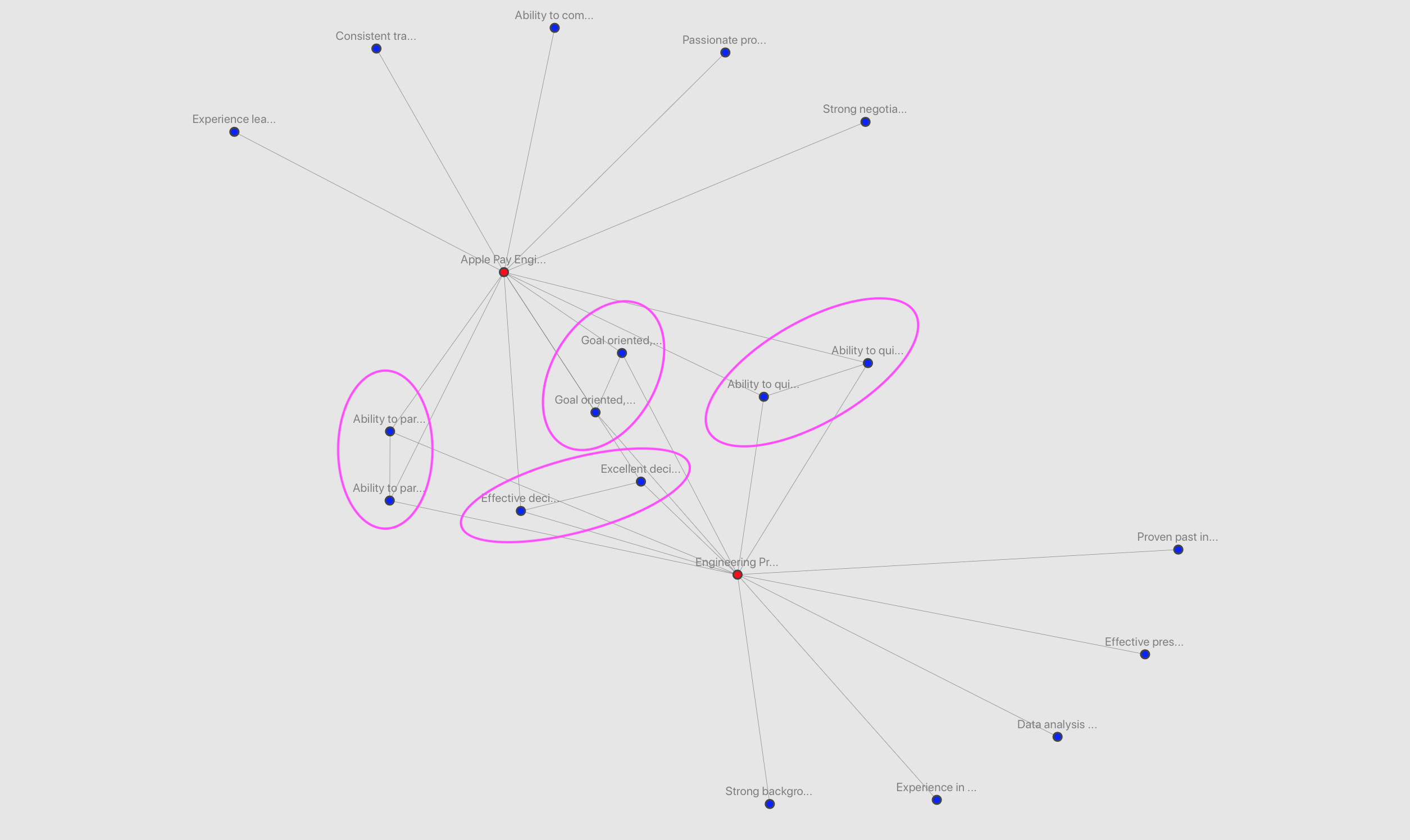 Of course, improving legibility and making it easier to understand connections can still be worked on. But it's easy to see that some roles have more overlap than others. At the same time, some qualifications say so much that they might as well be describing every role, like this: "Goal oriented, highly motivated and able to work under minimal supervision in a cross-functional environment at detailed levels whilst taking account of interdependencies at higher levels".

Still, it's useful to see if some roles more heavily overlap with others. One could apply to groups of similar roles without modifying their resume and/or cover letter, increasing application efficiency.

Here's the full Plot.ly output if interested (select groups to zoom in and inspect, mouseover a node to view full role or description):

There are more important things one can do that improve their chances at landing a role. However, this was still an interesting learning experience.